Negotiations are Part and Parcel of our Daily Lives

Negotiations are part and parcel of our lives. Whether it is bargaining with the vegetable vendor or haggling with the butcher, we are all exposed to negotiations as part of our existence.

Thus, one cannot but master negotiating skills if one to has to navigate the tricky and treacherous waters of our world.

While the negotiations described above are usually over a small sum of money, in the corporate world and in the world of inter governmental universes, the negotiations usually entail high stakes and hence, must be carried out with care and caution.

These types of negotiations can range from business to business deals such as Mergers and Acquisitions to Buyouts and Leveraged Swaps, and to negotiations in the international bodies such as the ones taking place with respect to the Brexit or the long drawn out negotiations between the United Kingdom on one hand, and the European Union on the other hand.

Indeed, if not anything what these examples show is that negotiations are not easy and hence, both sides must prepare well in advance and with enough information as well as recognition of one’s limitations before approaching the High Table for talks.

As can be seen from the limited success that President Trump (the self styled Art of the Deal negotiator) has had with North Korea, China, and the Mexican and Canadian governments, it is not enough to say that one is great at negotiation if all that one has achieved is nothing but Made for Television negotiations high on style but limited on substance.

Thus, what the ongoing battles over Brexit and Trump’s numerous attempts to strike deals show is that negotiations are not Child’s Play and must be best left to the Adults in the Room who have experience and the needed patience to not only put their point across but also to convince the other side to accept their POV or Point of View.

Indeed, high stakes negotiations are usually tense and fraught affairs where neither side is willing to budge and where the fine print is as important as the ultimate statement that is put out at the conclusion of the deal.

The lesson from Brexit and the various negotiations carried out by the Trump administration is that negotiations need not be Zero Sum games where one side wins and the other side loses and instead, can be fructified as Cooperative Games where both sides can get the best on offer.

Insights from Game Theory to Explain how Negotiations Work

The terms Zero Sum Games and Cooperative Games as well as the related Nash Equilibrium are from the field of Game Theory that specifies how different actors and stakeholders in High Stakes Negotiations often approach the negotiating table.

These terms and theories prescribe an approach to negotiations that can be utilized by the different stakeholders to actualize optimal outcomes for their respective positions.

Moreover, another term that is frequently invoked in high stakes negotiations is the Asymmetry of Information where one side has more information than the other side and hence, is able to gain significant leverage and advantage over the other merely because they are more acquainted with the process and are better prepared to negotiate.

Indeed, as mentioned earlier, adequate preparation is a must in the world of high stakes negotiations and in addition, the negotiators must hold their nerve and not Blink First if they are to not concede their advantage to the other side.

Moreover, negotiators must not be in a hurry and like a Zen Master must bide their time and wait for the correct opening in a manner similar to Chess Players who plan ahead and at the same time, are ready for surprises. 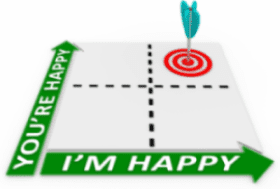 Negotiations in the Digital Age and the Point of No Return

High Stakes negotiations in the Present Digital Age have taken on a more risky mode as it is easy for the negotiators to be swayed by the Pressures of the Moment and concede to the other side.

For instance, in both business and governmental negotiations, if all that the negotiators are doing is Playing to the Gallery wherein they incessantly look out for Breaking News, Facebook Posts, and Tweets, the end result would likely be what the Lowest Common Denominator wants rather than what the optimal outcome would be.

Indeed, the Digital Age has made High Stakes Negotiations that much tougher as each side is eager to show the world that they have won and hence, may be prone to making mistakes in the rush to announce their victory to the world.

The point here is that negotiations are painstaking affairs and long drawn processes that take time to conclude and hence, negotiators must eschew the optics of high visibility media appearances and instead, must focus on actualizing a winning hand.

This calls for hard work prior to the negotiations, due diligence done in advance, patience and fortitude during the talks and above all, a tendency not to push things to the Breaking Point and take the negotiations beyond the Point of No Return that would stymie the talks and end in failure.

Thus, as can be seen from the theories and the examples cited so far, experience and expertise in negotiations are needed and for rookies, it is better to learn from the experiences of their seniors and use such learning when they get the chance.

To conclude, negotiations are part of our lives and hence, one can draw upon one’s life experiences as well as insights from learning on the job to become a successful negotiator.