Is Emotional Intelligence Still Relevant in These Hyper Partisan and Toxic Times?

For long, the concept of Emotional Intelligence was quite popular in organizations and among people managers for its use as a predictor of career growth and professional success.

Indeed, it was widely believed and taken as a dogma that Emotionally Intelligent professionals who could manage theirs and others emotions were destined to grow and rise up the hierarchy.

Moreover, early stage professionals were measured by their ability to defer gratification and be empathic with their peers.

Therefore, these attributes that were thought to be drivers of Emotionally Intelligent Professionals were held as benchmarks for others to follow.

However, in recent years, due to the rise of Toxic Workplaces and Hyper Partisan organizational cultures, it is a moot point as to whether Emotional Intelligence as a predictor of career growth and success still holds good.

Indeed, with so much of negativity and toxicity in workplace environments, it is possible that the traits as defined by EQ or Emotional Quotient might not be as relevant as they were earlier.

The reason being that when everyone is aggressive and competitive, there is no place for such lofty competencies as Emotional Intelligence.

In other words, what we are now living through are extraordinary times wherein workplaces increasingly resemble war zones and the vitiated cultures are anything but congenial for individuals with High EQ.

On the other hand, a case can be made for the relevance of EQ as a measure of success since it is very much the need of the times now that professionals with the necessary emotional stability and balance are sought after.

For instance, as workplaces turn partisan and hostile, there is more than ever a need for employees who can manage such negativity with grace and in a competent manner.

Moreover, managers do need to have the necessary empathy towards their employees despite the latter being aggressive or demeaning of authority.

What this means is that it is precisely the toxic nature of the times that calls for individuals with deep skills such as the ability to manage challenging situations in a professional and emotionally intelligent manner.

Therefore, it is our argument that more than ever, workplaces need their employees to be sensitive and receptive to the needs of others as well as to give and take feedback and other communications in a clear, confident and mature manner.

Having said that, one might very well ask as to whether employees with high EQ do rise up the hierarchy as quickly as those who either suck up to their bosses or use other unfair tactics such as playing personality games and power games with those around them.

Indeed, given the fact that promotions in many large organizations as well happen due to reasons other than merit and suitability, there is an air of cynicism as far as using EQ as a predictor for career growth is concerned.

Moreover, in our perennially distracted world, the ability to defer gratification might seem quaint and outdated. 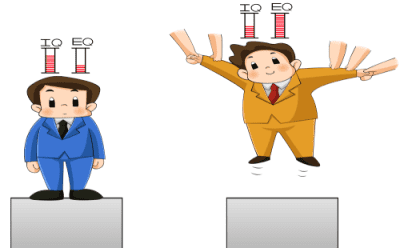 However, it is our argument that more than ever we need those with high EQ if organizations are to deliver sustainable and longer term value to their stakeholders.

Apart from that, there is also a case for empathy in our Pandemic stressed times as more than ever, we can recover from its deleterious effects only if we can relate and share and care for others.

This then is the crucial challenge of our times as we need those with patience, fortitude, and strength to get over the crisis. Therefore, we do need more with high EQs.

Take for instance, the recent Presidential Elections in the United States.

The reason why President Trump was defeated was mostly due to the toxic and vile and mean nature of his presidency as well as the overall culture of corruption and scandals that rocked his tenure.

Moreover, his handling of the Pandemic was a major source of worry and even alarm for many who promptly voted him out.

Indeed, the reason why most Americans plumped for the old yet steady Joe Biden is that more than ever, America needs a President who can empathise and relate to them instead of rambling and incoherent Tweeting Nonstop and that too, at all times of the day, including late nights and early mornings.

If not anything, the Presidency of Donald Trump can be seen as the main reason why we need leaders with high EQ.

The same goes for many Western countries where voters need reassurance and comfort and succour and not those who are divisive and vitriolic.

The Pendulum has swung the other way and it is our contention that in the future, workplaces too would veer around to valuing those with high EQ. This is the case for optimism despite odds.

Last, with online education and virtual learning becoming the norm, it might be challenging for students now to develop the necessary EQ that is gained from interpersonal interactions.

Therefore, it is our suggestion to educators and parents alike to devise some methods by which students can be made to be more Emotionally Intelligent as they prepare to enter the Corporate World.

To conclude, the hyper partisan and the toxic times call for more, not less, EQ and this is where sensitive business leaders with their vision and mission can make the difference by encouraging those with High EQ to grow.