The Role of Governments in Encouraging or Discouraging International Businesses

The Need to Encourage Foreign Investment

Often, the governments of many countries do not have a choice but to welcome international businesses as they need the “hard cash” or the Dollars, as they are also known. For instance, the difference between exports and imports is known as the Current Account Deficit or CAD.

Since many emerging markets (except China which has a positive CAD) have deficits that need to be financed with Dollars. Then, the governments can either borrow these Dollars at high rates or finance the deficit through FDI or Foreign Direct Investment and Equity flows into the stock markets from FIIs or Foreign Institutional Investors. 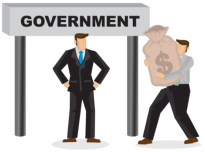 The Role of the Government

Apart from this, the domestic industry might not have the capabilities to succeed in a particular sector nor the expertise to develop that sector. Therefore, FDI becomes necessary for the growth of that sector.

Moreover, opening up of the economy is needed for admission into the WTO or the World Trade Organization, which means that in order to export to other countries, emerging and developing market economies have to open up. These are some of the reasons why many governments in developing countries encourage foreign investment and allow international businesses to setup operations in their countries. However, whether the successive governments continue the same policies or not depends on a host of factors that include the ideological bent of the governments, the compulsions of politics, and the fact that foreign investment might not have succeeded in kick starting the economy as planned.

Process must be continuous and consensual

The key aspect here is that many governments of the emerging economies often welcome the international businesses with open arms because of the reasons listed above. However, midway through the process, some of them develop cold feet because of policy paralysis, and the factors listed above.

Further, the competition for foreign capital is so intense that any let up in the process adversely affects the economy and hence, the process must be continued and the international businesses given due encouragement.

Finally, the examples of China, Brazil, South Africa, and Vietnam (which is still emerging) illustrate the need for consensus on opening up of the economies and following through the process.

On the other hand, the examples of India and Russia are the other way around as these countries opened up their economies due to compulsions and then with open arms but failed to keep up the momentum. This means that the integration into the global economy would happen only when the reforms process is done wholeheartedly and without pauses or U-turns.