This model of change is one of the unique models of change as propounded by Cynthia Scott & Dennis Jaffe in their article ‘Survive and Thrive in Times of Change’. The model derives its inspiration from the work of Elisabeth Kubler-Ross, in which she highlighted through her research the ways in which people coped with tragedies, grief or sorrow and based on her investigation she identified five stages of grief: anger, denial, depression, bargaining and acceptance. In a similar manner, Scott and Jaffe described the entire psychological process and how individuals respond to change.

The key highlights of this model havebeen given below:

As per Scott and Jaffe, we all transition through 4 stages of change: 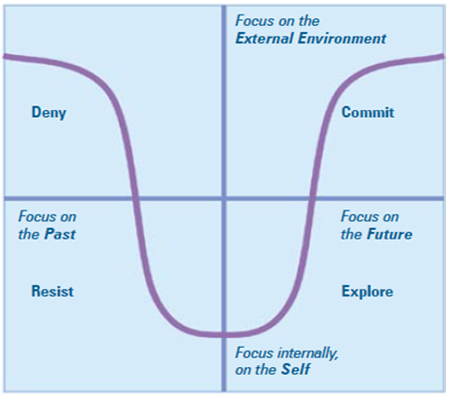 The model of Change as propounded by Scott and Jaffe is regarded as a predictive model which is far from the reality. But the model can be considered as a vital framework for understanding the process of change and it provides crucial insights on how one can manage change successfully by minimizing the resistance.